An email sent to A/Prof. Karl Ng at this 4 doctor practice on 8 Apr. 2019 using the ordinary email address, info@snnn.com.au.

A reply received the next day.

At least they sent us a reply. We would certainly have them on our list to email if we needed help with other neurology matters.

Posted in Uncategorised | Comments Off on Sydney North Neurology & Neurophysiology, Neurologists – dealing with

To us, even if, say, a doctor, works in a practice in which there are lots of other doctors, they should still have their own website, it can be quite basic, and their own ordinary email address.

Basic websites can be created by school children these days, and can be hosted for 2 or 3 dollars a week.

It’s most annoying when, with bigger practices at least, you send an email to a specific doctor and it shows up as having gone to a completely different doctor. You never know if it ever gets to the doctor it was intended for.

An email that could have been sent to Dr Lam of the parramedicalcentre.com.au on 8 Apr. 2019. 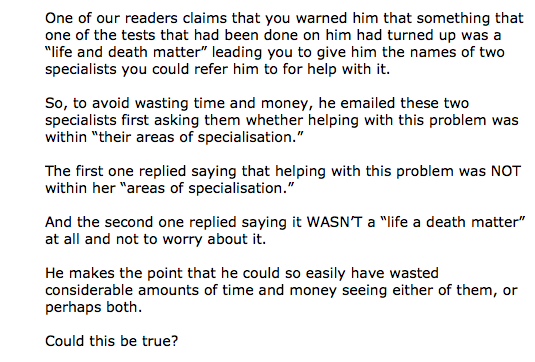 Except that we don’t bother with doctors who don’t at least have an email form to use to send them anything, as is the case with Dr Lam. (And we advise our readers to do the same.) The best means we can find for sending anything to Dr Lam is a fax number – SO last century!!!

Posted in Uncategorised | Comments Off on Dr Dung Lam, GP – dealing with

As advised in this previous post, a letter of complaint was sent to this Commission about Dr Timothy Tan, Cardiologist – to view this letter in full use this link.

Nearly 3 months later a response was received, authored by a Ms Nada Fraser, describing herself as a “Senior Assessment Officer,” which can be viewed in full by using this link. To us  this response is a disgrace – school children could do better. 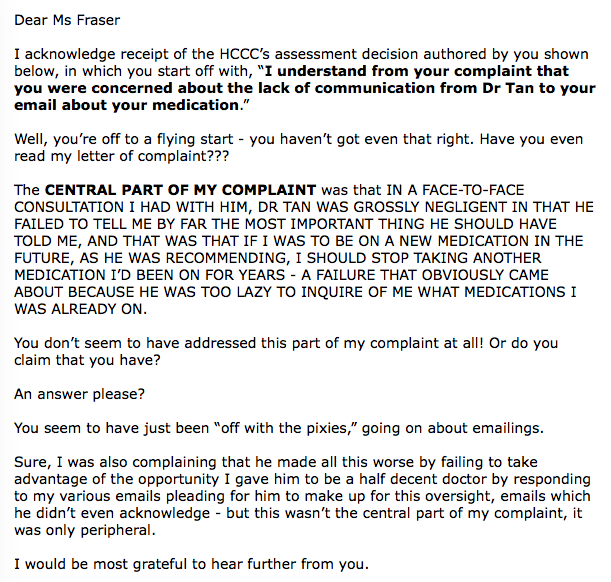 Would the senior management people in the HCCC be concerned with the quality of this response? We’ve never got the slightest indication that they might be.

Would the Health Care Services Commissioner, Sue Dawson, in particular, be concerned with the quality of this response? We’ve never got the slightest indication that she might be.

Would the HCCC’s political masters, be concerned with the quality of this response? We’ve never got the slightest indication that they might be.

We’ll keep you advised as to what happens from here on. Perhaps, this time, things might be different.

We’ve mentioned before how one of our readers claims to have read once that, on an average, it takes 17 years for medical breakthroughs to become common practice!!!!!!!!

i.e. for up to 17 years the people, you and I, are unable to find anyone who will help us to get the benefits of a medical breakthrough.

Low Dose Naltrexone is said to be a medical breakthrough. In fact, on the internet it’s being claimed by some to be the greatest medical breakthrough in 50 years. But with LDN, there are factors which may make it longer than 17 years for people to get it’s benefits, perhaps much longer.

So, today, (on 5 Apr. 2019,) we’ve started sending out emails like this to Neurologists – some to ones we’ve emailed before and some to new ones.

Email us on info@questionsmisc.info.

An email just sent, (on 4 Apr. 2019,) to Dr Sandbach using the email address – admin@annandaleeyecare.com.au – on this website. 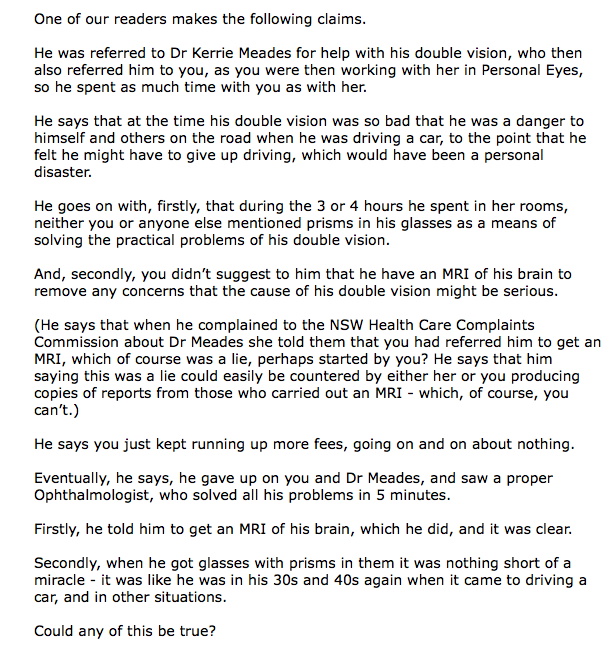 We’ll let you know if we get a response. We’re not expecting one.

Of course readers can always email Dr Sandbach yourself, and perhaps always should email her yourself. You may find her better to deal with than our reader claims to have found her.

Posted in Uncategorised | Comments Off on Dr Jennifer Sandbach, Ophthalmologist – dealing with

HBF Health insurance, based in Western Australia, claims to have over a million members – see their website.

We’ll let you know if we hear from them.

To us there is so much scope to try and sort out which are the best of a bad lot.

An update: As soon as we put this post up, we got this from another of our readers – a retired GP.

Posted in Uncategorised | Comments Off on HBF Health Insurance – dealing with

An email we would have sent Dr Stewart, (on 3 Apr. 2019) if we could have found an ordinary email address for him, but we can’t even find an email form for him! 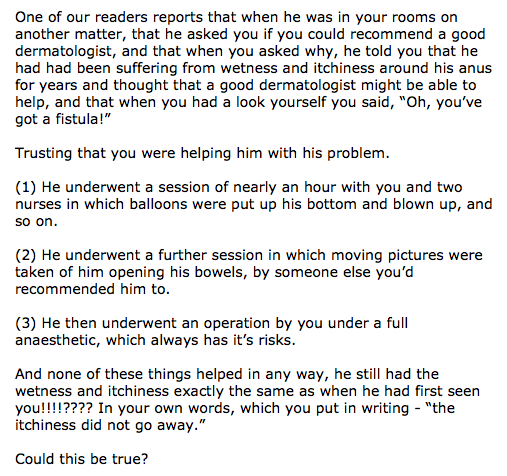 We are conscious that this blog may come over as unnecessarily negative, but we are always looking for health care practitioners who have ordinary email addresses and who provide reasonable responses to reasonable emails sent to them, but the reality is that it’s much more likely that a health care practitioner won’t have an ordinary email address, or, if they do, don’t provide responses to emails sent to them, but that it may still be helpful to readers to know which ones to avoid.

One of the things that fascinates us, and Peter Drucker talks about it too, is that top management people often don’t have to DO anything, it’s sufficient if their underlings KNOW that they KNOW.

As we’ve mentioned before, according to an article in the Sydney Morning Herald, a resident in BUPA’s aged care home at Eden had maggots growing in a wound in his head to the point where he had to be taken to hospital, presumably because the maggots had started eating into his head, which is what maggots do, it had passed the point where the maggots could have been just brushed off by the staff at Eden.

And emails to the people “on the ground” at Eden asking for their side of the story have been ignored. And emails to the top management people in BUPA have been similarly ignored, presumably because they don’t know and don’t care about what happened at Eden.

Our point is that if BUPA’s top management ever sent the people at Eden an email asking for their side of the story, they might think, “Oops! perhaps our top management people want to know, perhaps they DO care, perhaps they MIGHT do something!” But there’s not the slightest indication that anything like this ever happens or ever will happen.

(Similarly, if the Government’s Aged Care Safety and Quality Commission sent out emails like that, it might have the same effect, but there’s no indication that the people there ever have or ever will do anything like that.)

In the meantime, BUPA claims to have more than 70 aged care facilities, (none with ordinary email addresses, as far as we can see,) and readers need to realise that if any residents in them have problems the above tells them exactly how they and their loved ones would get on – it’s naivety to think otherwise.

It’s hard not to think that the only expertise the top management people in BUPA have is in extracting the maximum number of dollars out of every situation.

Of course, an email or emails from them, (they promised to get back to us within “two working days” 18 days ago,) which we promise we’d pass on to our readers immediately, might change everything. We can hardly wait!!!

An email just sent, (on 29 Mar. 2019,) to Dr Tan, using his email address, tim.tan@sydney.edu.au, on the University of Sydney School of Medicine website.

We’ll let you know if we get a response.

Should readers consider using Dr Tan? Perhaps an email from him telling his side of the story will change everything.

Posted in Uncategorised | Comments Off on Dr Timothy Tan, Cardiologist – dealing with