Readers, people, if you’re thinking of dealing with an organisation or person.

Firstly, search for an ordinary email address for them, and, if you can’t find one readily, don’t consider using or dealing with them for a nanosecond, other things being equal.

Secondly, if you find an ordinary email address for them, send them an email about something – to a certain extent it doesn’t matter what, although obviously it has to be something sensible.

If they don’t reply, again don’t consider using them or dealing with them for a nanosecond.

If they do reply, you can compare their reply with replies, if any, you’ve got from other similar organisations and people, and at least, perhaps, have initial dealings/consultations with the one or two who have provided you with the best.

But one thing is certain – if organisations or people don’t reply, they are not going to ever be responsible for anything they’ve said or done, and if the chips are down, they are always going to deny that they’ve even got your email or emails. 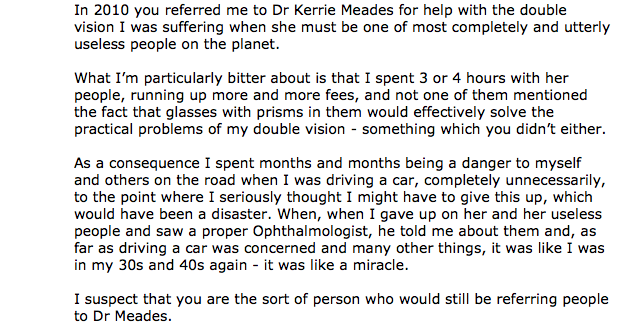 A number of similar emails have been sent to him over the last 9 years, none of which he’s even acknowledged, let alone replied to – and we certainly haven’t ever got any indication that he’s going to be responsible for anything he’s said or done.

And if you don’t want to rely on our experiences, you can always email him yourself – we’d always be more than happy to publicise the experiences that others have had.