We’ve been working for nearly 10 years on our blogs and websites seeking, for ourselves and our readers, to find the best doctors to deal with and to avoid those who perhaps aren’t the best. And in that time we’ve found 4 who we consider to be amongst the best, and Dr Fitzsimons of Marsden Eye is certainly one of these. 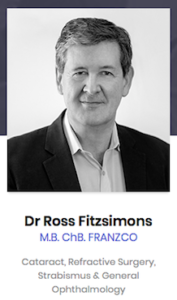 One of our readers reports that he’d been experiencing double vision problems to the point that, even though he was still only in his early 70s, he may have had to stop driving a car as he was becoming a danger to himself and others on the road, which for him would have been a disaster. For help with this, he’d been referred to a Dr Kerrie Meades, who, along with her people, had proceeded to stress how difficult double vision was to investigate and how serious it’s causes might me, obviously so he would keep seeing them and seeing them and running up more and more fees. But when he saw Dr Fitzsimons his problems were virtually solved in 2 minutes.

Firstly, after a brief review of the patient’s history of double vision, Dr Fitzsimons advised that he thought it was incredibly unlikely that it was due to anything serious, but, if he wanted to remove any doubt, he could have an MRI of his brain, which he did and it was clear.

Secondly, to solve the practical problems of his double vision, he said he could have prisms in his glasses, which was/is incredibly simple and which, when he did it, it was like he was in his 20s and 30s as far as driving a car was concerned.

That, a patient could spend 3 or 4 hours in Dr Meades’ rooms seeing her and her people, and for glasses with prims in them not to have been mentioned even once by any one of them is one of the greatest scandals we’ve ever heard of!!!

Our reader also mentioned that he referred one of his friends to Dr Fitzsimons, and after he’d operated on her she was SO excited – she said it enabled her to throw away three pairs of glasses.

(By the way, our comments only relate to Dr Fitzsimons. Our reader says he had an experience with one of the other Marsden Eye doctors and it wasn’t good at all. And some of the Google reviews on other doctors, for what they are worth, are horrible. But we don’t take too much notice of reviews – only of email responses to our emails.)