WordPress is an organisation that provides software for the creation of websites and blogs – see their official website. This is on their home page.

But, as is typical with so many similar organisations, there is no way  contacting them!!!!! – something we always find quite flabbergasting. (At least, not that we could find anyway.) When you go to the home page of a person or an organisation and the word “Contact” doesn’t appear on it anywhere, it’s usually a bad sign – indicating that this word probably doesn’t appear anywhere on it’s whole website, as appears to be the case in this instance.

We have been using WordPress for a number of years and had got quite used to it, but when we downloaded it in the usual way to create this blog – dealingwith.net – what was downloaded was so different to what we were used to that it was as though we had to learn a new program, something which we always find time consuming and difficult.

So this letter was sent by email to Tiger Technologies, the people who host our blogs and websites, (about whom more later.) 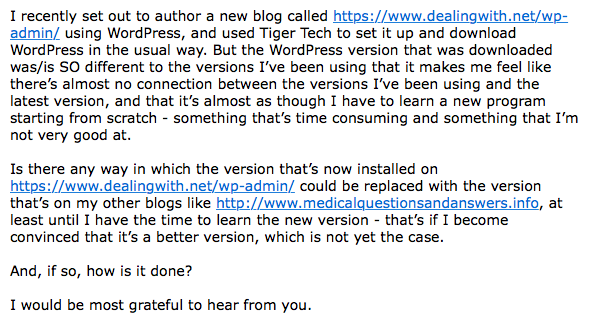 A reply, including this, was received within 24 hours. 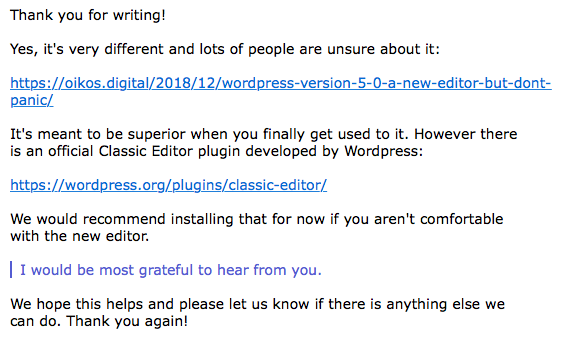 So this plugin was installed, and we found we were dealing with a version of WordPress which we found to be relatively similar to what we were used to. Thank you Tiger Technologies – we are so grateful.

To us, it’s a total mystery why we could and can’t get this help from WordPress themselves – but, as we say, there doesn’t appear to be any way of contacting them.